The Philadelphia Live Nation office reached out to me and offered me a spot on the official media team for The Peach Music Festival in Scranton, PA.  The festival featured a very jam-band heavy lineup, which was much different than the artists I am use to shooting.  It was refreshing to shoot a festival were I would be completely unfamiliar with the artists on the lineup and it was a much different change in pace to the festival I had photographed the weekend before, Moonrise Festival.  Having not attended The Peach before, I did not know what to expect.  But I did not let my noob-status in this genre of music affect me, and with my bags packed, I headed up to Scranton with fellow photographer Ryan Farber to shoot the festival.

The one thing I love about being a photographer is that every job you take will be different. Especially in regards to concert photography, no two shows will ever be the same.  Whether it is a DJ deciding to go crowd surfing or a tour manager who just let you on stage for a few shots, a good photographer must be ready for anything.  You only get once chance for the shot, so it is best to not fuck that chance up.

On day 3 of The Peach I walked into the media trailer and was told by the Digital Media Manager for Live Nation that he just got word that a local Scranton resident, who owned and operated a hangar at the nearby Scranton Airport, was offering to take one photographer and one videographer up in a plane and fly them over the festival.

It is not every day you get to fly over a music festival, so naturally, Ryan and I both wanted the opportunity.  But there was only room for one, and seeing that a fight to the death was out of the question (or was it…?), we had to decide the only way we knew fit – rock, paper, scissors.  Best of 3, of course.

After a quick 2-0 victory (sorry again Ryan), it was decided that I would get to fly over the festival.  It was at this moment that I decided to tell the other members of the media team that I feared nothing more in life than flying. Shark attacks may be a close second.  But I would not let my fear of flying prevent me from this once in a life time opportunity, so I grabbed my gear (Nikon D600 along with my telephoto 70-200 f/2.8.), hopped in the car, and made my way to the Scranton International Airport.

After parking, we walked into the private hangar and were directed outside onto the runway where our plane awaited us.  We crammed into the 6 person plane, which then proceeded to make its way down the runway.  As soon as we got airborne I realized I was in for a bumpy ride. 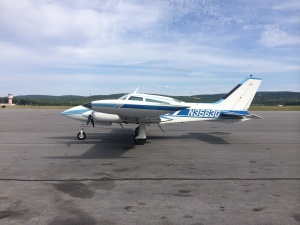 Now I have been taking photos for as long as I can remember.  I got my first camera in 7th grade, but had used my dads camera every chance I had before that. I had a darkroom growing up that I used all through high school, and by senior year of high school, I made the switch over to a digital camera.  I also worked for a school paper for all 4 years of college, photographing everything from the G-20 and Super Bowl riots in Pittsburgh to nuclear physicists giving lectures.  But nothing, and I mean nothing, has ever been as challenging as this assignment.  Why?

1. I hate flying. Loathe it actually. I must lubricate myself with a few drinks any time I fly.

2. This wasn’t a helicopter that would hover over the festival. It was a plane that flew fast. Really fast. So I had to not only compensate for the lighting but also use a fast enough shutter speed so my photos would be in focus.

3. I had to shoot through dirty windows that caused awful glare.

The best comparison I could make to this adventure would be to trying to photograph a crowd of people on the ground while riding a roller coaster. Every single movement the plane made resulted in tremendous g-forces that were applied to your body.  You know that feeling you get on a roller coaster when you go downhill? Yeah, imagine that, over, and over, and over again.

We made 4 or 5 passes over the festival, with the plane rotated in all types of directions.  I really had no idea if my photos were coming out when I was taking them and I just kept shooting like there was no tomorrow.  By the time the plane landed, I was drenched in sweat and thought my previous meal was about to make its way up at any second.

The real kicker, however, is that none of these photos even got used by the festival.  Why? Well, they had a $10,000 drone flying over the festival with a $4,000 camera on it. That drone took my photos, chewed them up and spit them out. I would compare it to when humans tried to play against the IBM machine Watson on Jeopardy.

But hey, I got to embark on a once in a life time opportunity and fly over a music festival, and that is pretty cool if you ask me.